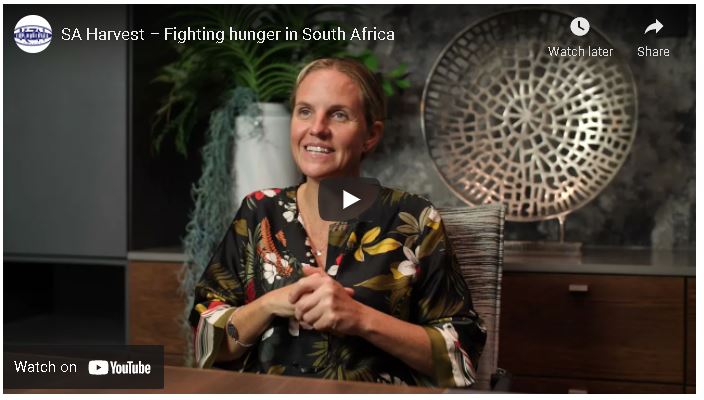 South Africa’s fastest growing food rescue organisation, SA Harvest, is continuing its rapid expansion in its mission to end hunger in South Africa. The NPO, which launched in October 2019, operates from four warehouses around the country – in Cape Town, Johannesburg, Durban and George.

The exponential growth of this young organisation, sister to OzHarvest in Australia and operating under the chairmanship of airline entrepreneur Gidon Novick, comes in response to the unprecedented increase in food insecurity in South Africa. Prior to lockdown it was estimated that 13 million people were going hungry daily. Today, with unemployment reaching 32,6%, the number has increased to around 20 million people experiencing hunger every day.

“Ending Hunger in our country requires both practical and sustainable solutions in a collaborative framework. SA Harvest is working with many organisations and corporates that understand that while charitable food donations are critical at this time, ending hunger also requires intervention in a system that causes hunger in the first place,” says Alan Browde, founder and CEO of SA Harvest.

In the last 24 months, SA Harvest has rescued over 3,3 million kilograms of food and delivered the equivalent of 11 million meals to food vulnerable communities across South Africa. SA Harvest’s fleet has expanded to five refrigerated vehicles, with access to additional vehicles through partnerships with logistics companies. The NPO now employs a staff of 28 people.

Alan Browde, SA Harvest Founder and CEO, says that the delivery of over 11 million meals – which equates to more than 15 000 meals every day – was way beyond the organisation’s initial expectations for the first two years. “Our journey has been filled with many milestones, the most significant of which are the long-lasting relationships we’ve created with food donors, benefactors, and most importantly, with more than 200 beneficiary organisations who feed hungry people every day. Aside from these vital and fulfilling relationships, we have also built a magnificent team – men and women who go the extra mile to enable SA Harvest to fulfil and go beyond its objectives.”

SA Harvest’s 380m² Durban warehouse in Briardene, together with a refrigerated four ton truck and logistics solutions with outsourced transporters and staff of seven enables the delivery of an average of 12 500 meals per week to beneficiary organisations, extending from Richards Bay in the north to Umlazi on the south coast to Hammersdale near Pietermaritzburg. SA Harvest’s Durban operation was ramped up significantly after the KZN riots in July, when two 1 000 square metre marquees were erected on sports grounds in the city centre within one day, serving as a temporary warehouse for the massive volumes of food and essentials being transported to the city from SA Harvest’s branches in Johannesburg and Cape Town. Relief stock is now being delivered to over 100 vetted beneficiaries that are all registered non-profit organisations. More importantly, adds Browde, data collection systems have been bolstered to ensure, inter alia, accurate reporting to our donors and efficient and equitable distribution of produce to the fast-growing number of beneficiaries in a substantially increased geographical area “Transparency is fundamental to our operation and we are being especially vigilant in a situation where the rapid extension of our services to the more rural and largely neglected areas of KZN that have been severely affected by the unrest.”

In Johannesburg, SA Harvest’s move into a dedicated warehouse in Eastgate, Sandton, increases its capacity to 40 tonnes per week. The region is headed up by operations manager Victor Mpofu, who, working with a team of six staff, delivers in excess of 65 200 meals per week to its beneficiary organisations.

The NPO’s Cape Town operations are well established, operating from a base in Epping. With a capacity to handle 45 tonnes per week, the Cape distribution centre currently delivers 32 600 meals every week, with a staff of four under operations manager Lane Ridgway.

SA Harvest’s reach extends from inner city to townships to rural areas. In addition to its four main centres of operation, the organisation has satellite networks in Mpumalanga, Bloemfontein and Port Elizabeth.

Eastern Cape operations will be run from the newly opened George office. For more information www.saharvest.org