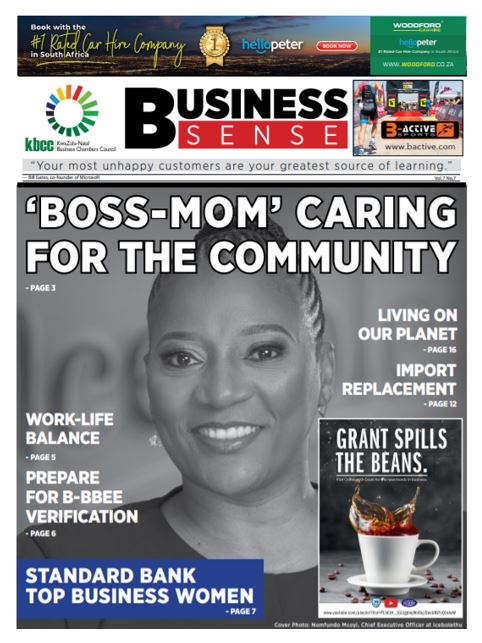 Nomfundo Mcoyi is a multi-skilled entrepreneur and passionate community builder who is based in KwaZulu-Natal. She has come a long way from township girl to teacher, to founder and CEO of the Icebolethu Group.

While the core business of the Icebolethu Group is funerals, the various companies under the Group’s umbrella include funeral policies, memorial parks, tombstones, catering, and loans. Nomfundo is the chairperson of the KZN South African Funeral Practitioners Association and is a shareholder at Scribante Labour Consultants as well as Blacksuits.

When Nomfundo started her business, she had no financial resources, not even a loan, but she had a big dream. In addition, she had no experience in the funeral business, and no mentor to guide her. Instead, she looked to her opposition – the major funeral companies. She said, “I never looked at the small companies. I always knew exactly what I wanted to achieve; I wanted to own a very big company, so I measured myself against the biggest and the best. It’s been a long journey. It wasn’t easy and it took perseverance, focus and determination. I’d never even buried anyone – but I did my research and focused on my vision.”

Twelve years later the Icebolethu Group boasts over 120 branches in KwaZulu-Natal, as well as a branch in Johannesburg and one in London. Nomfundo said, “The brand is really doing so well in the funeral industry. We’ve grown through hard work, dedication, and passion and through having a very great team that supports me and my entire vision. I am very grateful for the growth we have seen over the past years. My future goals are to see Icebolethu grow globally, including throughout Africa. We would like to have more partners in offering our services.”

Nomfundo says that the growth of her business is motivated by creating jobs for people. When the company started it consisted of five people, now Icebolethu employs over 1500 people. “That means that there are 1500 families that get to have food at the end of the day because of the vision that I had when I started Icebolethu. That makes me very happy.”

She added that she would like to continue to create more jobs. “We cannot rely on government and need to grow sustainable businesses that will support and give back to all the communities.”

One of the major challenges that Nomfundo has experienced has been entering into the male dominated funeral industry, which has been tough. “I remember when I started, I was on a committee where there were 11 males, and I was the only female. Everything I said I had to say twice. They did not believe in me and said that I would fail. I decided not to listen to them and continue with my journey. I am a person of excellence and continue to apply that excellence in the business – look at where it is today.”

Nomfundo’s charity, the Icebolethu Foundation, is particularly close to her heart. The Foundation has several active projects, but she is particularly proud of the Rhoda Girls project. The Foundation has ‘adopted’ 50 girls to mentor for a five-year period. These girls attend courses and camps, and the Foundation pays their school fees. Nomfundo is personally involved in the mentoring, and as she puts it, “We’re trying create fifty more Nomfundos of the future; girls who have the skills and the confidence to go out and create businesses and employment for others.”

Other projects include an agricultural programme where seedlings are provided for gardens in different communities so that people can grow their own food. The Foundation also builds houses for the poor. The next project will be the establishment of computer centres for the youth to access, which speaks to 4IR and the digital world that we are moving in to.

Nomfundo relates how her grandmother was also a very giving woman, who went out of her way to care for people in her community. “My late grandmother was a remarkable woman and a great entrepreneur for her time. She was fierce, focused and determined, and she ran my grandfather’s business when I was a child. I always wanted to be like her. My foundation was inspired by her and giving back to the community is my way of paying respect to the example she set for me.”

The advice that she would give to other people following in her footsteps is not to do things for money but to follow a career because they love it and are good at it. She added that women must also understand that will not just get things because they are women, but because they deserve them and work hard.

“You must just be excellent at what you do. Focus on your goals and your vison and don’t take shortcuts, they’re not the answer. Work hard, be professional and do things the right way, and for the right reasons. Just be excellent; that’s the key.”

Finding a balance in life does not come easy to Nomfundo. However, she says, “I do find time for family and friends, that’s very important. I love to travel, usually with my family; it’s a great way to grow your knowledge, broaden your mind and see new opportunities.”

Nomfundo, who positions herself as a cooking enthusiast, rather than a cooking expert, has recently published a cook book “Boardroom to the Kitchen with Nomfundo Mcoyi”. The book offers readers a behind-the-scenes look into her life as a businesswoman and how the kitchen has been an integral part of her family life. Filled with her personal antidotes and essays, this cookbook relates the story of her humble beginnings and how Nomfundo turned her dream into reality.