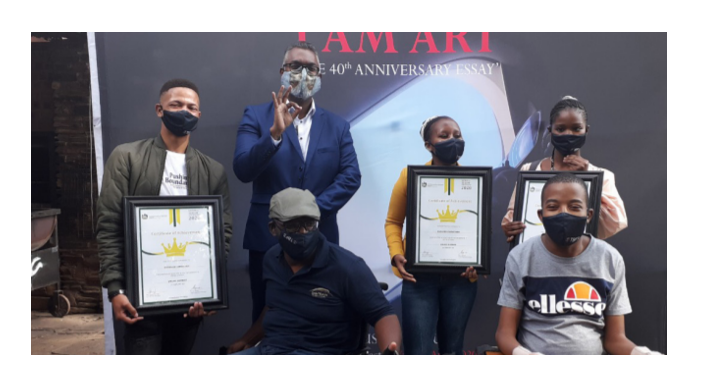 This book launch highlighted three very important issues for Zulu. Firstly, the book celebrates the four decades (1979 – 2019) in which he has lived as an artist, together with reflecting on the 25 years (1995 – 2020) that he has spent in his wheelchair.

The second was to highlight the 100 years that the Open Air School for learners with disabilities celebrated on the 9 February 2021. This says Zulu is, “A milestone that I feel has been grossly overlooked in South Africa.”

The third was to celebrate the learners from the very same school who recently passed their 2020 matriculation examinations with distinction. “They even topped their able-bodied peers in the province, but were not invited to the KwaZulu-Natal ‘achievers awards’ ceremony held by provincial  education authorities a few weeks ago.”

“It was an honour to be joined by the Deputy Minister Hlengiwe Mkhize in the Presidency who called in to congratulate Open Air School for their 100 years. I was humbled that she spent a full 15 minutes talking to the four 2020 matric graduates and their principal, Mr Moodley.”

Reflecting on the launch Zulu said, “This will go down as one of those very memorable days in my life. I was in the presence of some of the people that have made me the man I am today. I am thankful to life for granting me another moment to be happy as I reflect on the many blessings I have received to share. It was an amazing day indeed.”

The Gautrain Management Agency, which Musa has worked with extensively in the area of disability accessible transportation systems over the last decade, has sponsored the printing of 1000 copies of the book.

In addition, Zulu will be starting a ‘100 000 Messages Campaign’ to get the South African public to send messages of congratulations for the schools who have had 100 years in service to the disabled sector. Potential partners for this initiative are currently being identified, which will culminate in the launch of a book with all those messages on the 3rd of December 2021 (International Day for Persons with Disabilities).