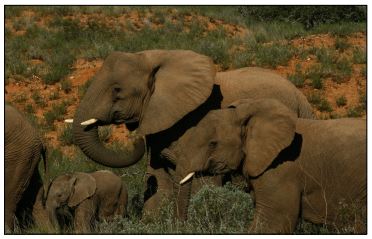 The Human Elephant Foundation is making positive strides in conservation success in KwaZulu-Natal and beyond, and through its linkages with Rewilding Africa CIC, Project Rhino, CWC Projects and other supporting organisations is helping give birth to a new wilderness area known as Loziba Wildlife Reserve.

Situated in the beautiful Thaka Valley in northern KwaZulu-Natal, Loziba is adjacent to Babanango Game Reserve, another incredible rewilding project aimed at securing land for animals to live in today and thrive into the future, and for local communities to benefit through tourism by providing services within these wildlife reserves.

Initial steps in the development of Loziba as a sanctuary for elephant, rhino, and other endangered species have been the purchase of a pristine farm called Zoekmij. This natural bushveld stretching some 3 600 hectares is in the heart of Loziba and has for many years been home to a herd of 40 elephants. In recent months these elephants came under a destruction order from Ezemvelo Wildlife because of their interference with local communities, so the Human Elephant Foundation stepped in and purchased this land and secured the elephants’ tenure in their known paradise.

The Human Elephant Foundation was the brainchild of acclaimed South African sculptor Andries Botha, who in 2009 saw an opportunity through his artwork to create an organisation to help stimulate conversation and debate encompassing topics such as earth’s fragile ecology, disintegrating human value systems, xenophobia, human conflict, the disintegrating family unit, human and animal rights, endangered natural resources, and the global migration and refugee crisis. Botha approached his good friend, high-profile business leader John Charter to join him in this important work. Charter was delighted, and immediately became the managing director of the Human Elephant Foundation.

Since those early days, the organisation has enjoyed incredible success. Recently Grant Fowlds, renowned conservationist and director of Project Rhino, and David White, KZN business leader and wildlife advocate, joined the Foundation, bringing with them their passion for positive change, powerful networks, and creative funding and community development considerations.

The elephant is used as the Foundation’s symbol due to its vulnerability. Elephants are the world’s largest land mammal, with incredible wisdom and strength, and yet fragile in their ability to co-exist with humans in our fast-changing world. Elephants are incredibly similar to humans. They love, protect, and nurture family members in the same way we do, and educate their young with skills to survive in the wilderness. They also mourn the passing of family and friends. We only have to look into an elephant’s eyes to sense that we share similarities in our emotions and mental considerations.

The Human Elephant Foundation has placed Botha’s life-sized elephants in prominent places around the world helping to encourage conversations around the precarious state of our planet. The concept was successful and has helped ignite innovation and creativity to foster understanding of the importance and value of caring for and promoting conservation and rewilding activities.

The Human Elephant Foundation is not only concerned with elephants but nature as a whole. Elephants are at the sharp end of change and used as the symbol for the whole of nature as a keystone species. The Foundation recognises too that successful conservation initiatives in natural and wilderness areas are only possible when local communities are involved in drawing incomes and livelihoods.

The Human Elephant Foundation has been involved in many efforts over the years. One successful project has been Roving Reporters. This organisation is run by veteran journalist Fred Kockott with friends and associates. It is committed to publishing environmental stories of both uplifting and depressing nature. At the heart of Roving Reporters is the notion of training young people in the art of environmental journalism, a successful endeavour which has been active for close to ten years.

The Human Elephant Foundation’s more recent aim is to support rewilding efforts through encouraging the purchase of unutilised farms in the Thaka Valley to create the 36 000 hectare Loziba Wildlife Reserve. Thereafter it will encourage joining game reserves such as Babanango, Mziki, Phinda, Hluhluwe, and Umfolozi, thus creating corridors for elephants and other animals to move freely between defined wilderness areas. Over time this momentum will pursue corridors that link game reserves right up to the trans frontier parks in Mozambique, Namibia, Angola, Botswana, Zambia, Burundi, Rwanda, and up the eastern side of Lake Tanganyika and beyond into Uganda. Loziba thus represents a catalyst in encouraging other wildlife reserves to recognise the importance of rewilding areas for animals to occupy and move about safely from land overutilisation through being confined into smaller areas. Each wildlife reserve is a microcosm of the natural environment, and each is critically important and ensuring the preservation of animals in our natural kingdom.

The late Dr Ian Player, the world-renowned conservationist and philosopher, had a widely held view about the connection of elephants and humans. He maintained that humanity reached Europe from the cradle of mankind in South Africa where human life began and developed, with the aid of elephants. Elephants are natural water diviners and moved from water to water through deserts and extreme dense vegetation right up to north Africa. Humans found it very easy to follow the huge elephant paths to Europe.

Yet it is the human footprint which has rendered them highly threatened. We have encroached upon their territory to such an extent that within 30 years or so there is a strong possibility that no wild elephants will be left on our planet. The notion of elephant corridors is the only concept that we can find to save these majestic creatures.

The vision is to join various reserves and natural areas together by encouraging other conservationists and advocates to allow elephant corridors through their territories. This will include communities in various areas where elephants are currently a huge threat to crops and livelihoods. Great advances have been achieved in this area with the help of Fowlds, a great Zulu and Xhosa linguist and friend to the people.

Dr Player and his conservation work had a huge and lasting influence on Charter. He recalls that just before Player passed, he received a wonderful tribute in a copy of Player’s book “Zululand, Wilderness Shadow and Soul”. Player said he had woken up at 3am one morning and had put the book he wanted to give to Charter on his hall table. When Charter unexpectedly came to visit that day, he said he knew then why he had got up so early that morning. Player then proceeded to write a tribute in the book for Charter. This was a wonderful moment in Charter’s life, and in a way the book acts as a passing of a baton of hope and responsibility from one person to another – and one generation to the next. Player as many will remember, was an exceptional person, mystical in his thinking and ways, who played a pivotal role in saving both white and black rhino from extinction in the 1930s and 1940s. Botha is in the process of creating a monument to Dr Ian Player, which will be erected in Umfolozi Game Reserve.

Botha has already erected a monument to Beyers Coetzee. Coetzee, another passionate and able conservationist, and Loziba Wildlife Reserve founder was tragically killed a few years ago while moving the Loziba elephants away from the community.

John Charter himself comes from a praised conservation lineage. His grandfather A.E. Charter, also an influential conservationist, fished in the lake now known as Charter’s Creek. A.E. Charter’s name is on Memorial Gate at Hluhluwe together with Potter and Powers as founders of Africa’s oldest park. A.E. Charter’s role at the time as provincial secretary of Natal was to proclaim Hluhluwe and Umfolozi.

There are many ways people can get involved in the development of Loziba Wildlife Reserve. Without philanthropic donors and CSR contributions from larger organisations, it is difficult to move forward at the pace needed to purchase farms, build fences, roads, lodges, etc. However, and as in all successful sustainability endeavours, the general public wants to be involved. We have therefore created a unique offering where people can pledge R2 500 towards one acre of Loziba rewilded land. People and companies may of course pledge funds towards many more than one acre. Land does not transfer in ownership to each individual but will be forever recognised as that person’s contribution to this magnificent project. Each contributor will receive an autographed Rewilding Africa book written by Grant Fowlds, a personalised thank you letter from the Human Elephant Foundation, a satellite link to their purchased land, and ongoing communication and reward structures. History will forever recognise these value creating contributors to Rewilding Africa and making it possible for elephants and other wildlife to thrive in KwaZulu-Natal, South Africa, and in Africa at large.

Please join our campaign, and even if you are not a philanthropic donor, a corporate sponsor, or individual contributor, please support and encourage this initiative and the important work being done by people all over the world. There are many people desperately working to reverse the damage done in wildlife areas over the past decades. The intention is to restore the health and beauty of natural areas, so that animals can thrive in their preferred habitats, communities can prosper, and future generations may enjoy the splendour and wonder of our animal and vegetation kingdoms.